Twenty years have passed since the last atlas of desertification was published. Within that short period, the environment has undergone enormous global changes due largely to human activities. Fortunately, because of the massive increase and growth in the availability of global and regional datasets – and the tools necessary to analyse them – significant progress has been made in understanding human-environment interactions. WAD3 thus begins at a very different place than WAD2 in terms of scientific information and understanding. That said, we are also confronted by the rapidly growing appreciation of the complexity of the land degradation phenomenon and all the human factors that both drive it and are derived from it. As a consequence, WAD3 offers an approach that accommodates and embraces these complexities and provides an information framework from which to pursue solutions that fit specific local situations.

WOCAT has contributed seven pages on solutions in this Atlas representing some insights from analysis of the Global SLM Database and with a focus on Central Asia as well as a number of nice photographs spread within the Atlas.

To refer to this 3rd edition of the World Atlas of Desertification please cite as follows:

The full version of this atlas will be available online at: http://wad.jrc.ec.europa.eu

This URL gives access to the index and leads to an interactive map interface where map layers compiled using the convergence of evidence concept can be interrogated.
Individual pages in this atlas contain QR codes which, when scanned, bring the reader to the exact online location to access the related page content.

The reuse policy of the European Commission is implemented by Commission Decision 2011/833/EU of 12 December 2011 on the reuse of Commission documents (OJ L 330, 14.12.2011, p. 39).
Reuse is authorised, provided the source of the document is acknowledged and its original meaning or message is not distorted. The European Commission shall not be liable for any
consequence stemming from the reuse.
Reuse of photos/figures/diagrams/data with source: WAD3-JRC, 2018 is authorised.
For reuse of photos/figures/diagrams/data of a third-party source (i.e. any other than WAD3-JRC, 2018) permissions must be sought directly from the source.

Sources are indicated throughout the Atlas by:
Source:[identification of the source]).

Published by the Publications Office of the European Union,
L-2995 Luxembourg, Luxembourg.

Due to the resolution of the underlying data which is often still too large to represent small islands, the maps represented in this atlas might not or not always represent a number of small Pacific islands. These are, however, insofar datasets relevantly cover small islands, included in the interactive online version of the maps that allows zooming in. 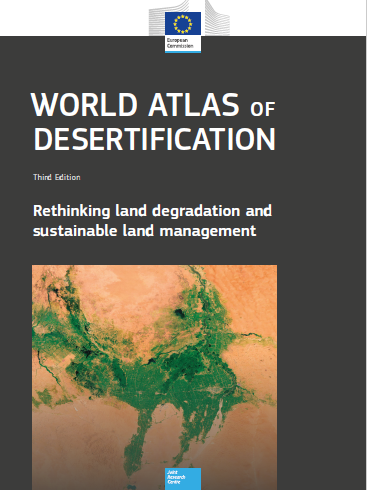